Contrary to popular belief, we cannot control our thoughts 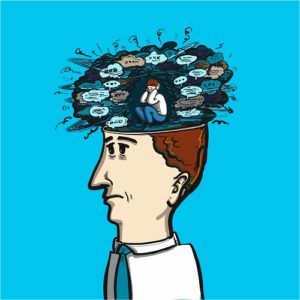 “What shall I write about today?” I ask myself.

“It doesn’t matter Melina, pick a topic and write!  You don’t have time to spend hours choosing!”

“Ooh but should I talk about magic being in the moment and share something from my dog walk yesterday?  Or should I pick one of the topics I listed in my most tedious blog post ever written!”

And then another voice appears reminding me that Day 2 of the blogging challenge is all about keywords and SEO!  And I haven’t looked at that content yet.  “Probably best to do that before starting”.

Wow it’s a bit congested up there in Melina’s Head!

All those voices clamouring for attention!

And believe it or not my head is REALLY quiet compared to what it was like a few years ago.  Back then it was just incessant noise – so much so that I wasn’t even aware of how much nonsense it spouted out.

Thankfully “the voices” now tend to only appear when I sit down to write.

Ok that’s not strictly true – the voices are there when I’m out walking too.  They’re busy composing blog posts!

This morning I read a FB post where we were warned to “choose our thoughts wisely”.  You know that age old adage “be careful what you wish for”.

But here’s the thing with our thoughts – we actually have NO CONTROL over them.

They simply appear in our heads unbidden!

We cannot choose our thoughts any more than we can force our body to poo on demand!

Yet there’s a whole industry centred around choosing the “right” thoughts.

Or maybe it’s me?  Maybe I’m the only one in the whole world whose thoughts appear unbidden into my head – whether I want them to or not.

“Is it going to rain today?”

And then there’s the conversations!  You know the ones that go backwards and forwards before making that difficult phone call or having that awkward meeting?

Then there’s the aftermath:

“You should have said that”

“Why did you tell them that?

We have the wonderful thoughts.  Our manifesting thoughts!  The ones where we focus on what we want (as if we have it) and it happens!

I was 15 when I first had this experience.  It was so awesome I’ll never forget it!  I had a crush on one of our neighbours.  He was older than me and his younger brother was friends with my brother.

One evening I played out a scenario in my head – over and over.  I imagined the boy I had a crush on, knocking on our door asking whether his brother was here.  I kept willing it to happen.

EXACTLY as I imagined it.

Although funnily enough it NEVER happened again (and believe me I tried!)

But what that experience did was pave the way for me to immediately accept the Law of Attraction when it was later introduced to me.

After which I had several AMAZING manifesting experiences!  Experiences which proved I was so powerful I truly believed I could conquer the world!

I pasted some wine glasses onto a vision board.   30 minutes later there they were: on the table in the restaurant where we were having lunch.  The EXACT same glasses.

Then there was the incident where I stopped time!  Literally!

I was in the “hot- seat” on one of my Mastermind groups – one of these where everyone has a certain amount of time to get coaching from the mentor.  During mine the clock stopped.  It wasn’t the battery – it had had a new one that morning and started working again after the break!  Spooky!

And of course the manifestation of my dream home – with EVERYTHING I wanted.

I wasn’t quite specific enough.  I asked for patio doors, which in my head led out onto an outdoor eating area.  However I omitted to specify that little detail in my request!  So, I got my patio doors – French doors in fact – but instead of leading out onto the eating area they lead out to the front garden.  Beautiful but not quite what I envisaged!

I also wanted an annexe in the garden to have as an office with two rooms and a log burner.  I got that!  But again in my head, the log burner was in the middle and would warm up both rooms.  Nah ah!  I didn’t request that little detail – so the log burner was at the end of the one room and not between the two!

But this was more “proof” that the Law of Attraction works and to definitely be careful what you ask for!

I selectively ignored the dozens of examples where I really wanted something, believed I had it, expressed gratitude for it as if I had it – and it didn’t come true!

Times when I’d beat myself up because I thought I was doing something “wrong”.

Of course those times it was all my fault they didn’t come true – I was “rubbish”!  I didn’t want it badly enough!  It wasn’t a must! I hadn’t DECIDED.  I was somehow blocking my desires!

This went on for years – oscillating between mega highs (yay look how powerful I am, I can achieve ANYTHING) and depressing lows (you’re rubbish, you’re never going to get there, you haven’t got what it takes!)

I went on an adventure!

During which I was taught that the Law of Attraction was a lie – an illusion we believe to be true.  That, in fact, we have no control over our thoughts and they definitely don’t control our reality – far from it.   And that if I scratched beneath the surface and pulled apart the mechanics of it I’d discover this to be true for myself.

And so I looked back through my past.  And realised that some of my BEST experiences ever weren’t anywhere on my radar until they actually happened.  For example:

I never wanted to do any of these things until I was blessed to experience them.

And transformation – I definitely wasn’t seeking that!

And as I explored further I began to experience how thoughts really work – that thoughts appear in our head and we perceive them.

It appears and we perceive it!

And this discovery TRANSFORMED everything for me.

Because I stopped giving power to my thoughts.

I stopped trying to change them.

I stopped listening to them.

Especially the ones that said:

Why did you do that you stupid idiot

Don’t be so crazy – no-one will buy that

Why don’t you get a job?

Within a couple of years the voices dimmed, and my head quietened down.

Except of course when it came to blogging and sharing my blogs – they are still pretty loud in that environment!

Although if no-one comments I’m pretty sure the voices will appear!

But that’s ok – because tomorrow’s another day and I get to do this all over again!

Ooh what will I write about tomorrow I wonder?

And please I’d love to hear from you – not just because it will quash the voices in my head – but because I’m naturally curious and would love to know what appears in your head as a result of reading this – do share below.