How to Eliminate Procrastination and Self-Sabotage 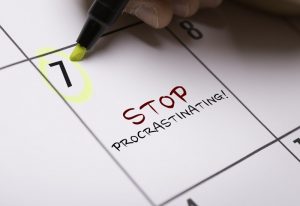 When it comes to getting more sales there are only two things you need to focus on:

Generating leads and converting those leads into paying clients.

The simpler and easier you make this whole process the more successful your business will be.  The conversion process involves regularly inviting people to take the next step on the journey to working with you.

For about 3 years this was something I wasn’t doing – I kept meaning to but other things would always take priority.

I wasn’t concerned because there’s a divine time for everything and my business was growing despite that.

However 2020 is all about expansion – Abundant Expansion.  It means stepping out more boldly and implementing what I teach.  I’ve never taught theory and only coach on things I’ve implemented and experienced.

And because I have all the pieces and know what to do, I simply need to put pen to paper and share them with the world.

A dear friend of mind had other ideas.

Maybe you know her?

I love her dearly – especially as she’s always coming up with so many fun things we can do.  Take one particular Friday for example, I was all set to write a newsletter about my coaching packages.  I was excited – raring to go when procrastination called and said “Hey Melina – take a look at Facebook, just for a minute before you start”.

I obliged – it was just a minute after all.

The one that sent me into a tailspin.

Such a tailspin I had to write my newsletter about it instead.

Thanks Procrastination – what a great friend – giving me such a great topic to write about.

Unfortunately I didn’t finish before I had to go out – but that was ok, I’d made a good start and would finish it later.

Except I didn’t like what I’d written.  So I re-wrote it.

Only I didn’t like that either.  I concluded it was best parked for the day and I’d get up early on Saturday morning to do it.

Self-Sabotage had other plans

Late Friday night another friend of mine decided to pay me a visit – her name is Self-Sabotage.  In truth, she’s not a great friend and I’ve slowly been cutting her out of my life.

But she must have been missing me and arrived saying “hey Melina, you’ve nearly finished that jigsaw – why don’t you stay up and finish it”?

What a fantastic feeling completing it was (despite the 4 missing pieces).

However when I went to bed I wasn’t tired so I read for a couple of hours( maybe Self-Sabotage hypnotised me).  It was 3am before I went to sleep!  No way was I getting up at 6am to write a newsletter.

By Monday morning – a full 72 hours later – I was on version 4 of my newsletter.

And it taught me a lot.

My 4-Step Process for Dealing with Procrastination and Self-Sabotage

Step One:  Appreciate that Procrastination and Self-Sabotage are fake friends that mean well.

They really do believe they’re helping so ignoring them or yelling at them doesn’t make one iota of difference – they won’t go away – they simply become more creative.  And they’re brilliant at disguises – they somehow even manage to enrol others in their wily ways – they’ll make your kids sick, cause boilers to break down, create an unexpected emergency or expense… you name it – if it stops you moving towards your desires Procrastination or Self-Sabotage are probably behind it.

Step Two:  Tell them how much you appreciate them

When they do turn up – especially if they turn up in disguise – it’s best to give them a high-5 and really acknowledge just how creative they are.  When we show them respect they tend to dine out on it for months and will leave us alone for a while – meaning we can get on and do the work we’re here to do

Step Three:  Get back in the saddle

As soon as we realise it’s our Fake Friends who’ve been messing with us – we must get back in the saddle – and continue with whatever we were doing before they made a visit. No drama, no big deal – we simply take the next step – whatever that is.

Step Four:  Bring light-heartedness and humour to the situation

Whilst it might seem counter-intuitive I’ve discovered it’s best to bring as much humour and light-heartedness as we can muster to their visits.  Procrastination and Self-Sabotage love the spotlight.  The more we delight in their wily ways yet continue on regardless, the less they bother us.   Curiously once we welcome them as fake friends and embrace the experience, we tend to discover they’re supporting us in their own weird way.  Often whatever action we take after they visit is far better than any we could have taken without it.  In truth they’re great friends masquerading as fake friends (really they are).

So there you have it – my 4 step process for engaging with Procrastination and Self-Sabotage.