How our commitments can exacerbate a “not good enough” story

In the personal development world it is often recommended that we publicly announce our commitments – maybe not to the whole world, but certainly in a nurturing group who will hold us accountable and support us when we fall down.

I joined a group in June to support me in my commitment to health and well-being.  Every month we recommit if we wish to continue and it’s been going really well.

However, as we neared the end of October we were asked to declare our commitments for the final 10 days of the month.  To finish strong.

And I hesitated because I knew that if I were to declare something simply because I was asked – and it wasn’t  something I had already whole-heartedly committed to myself first, I wouldn’t do it.

And instead of supporting me on my journey it would make me feel bad – that I hadn’t kept my word. 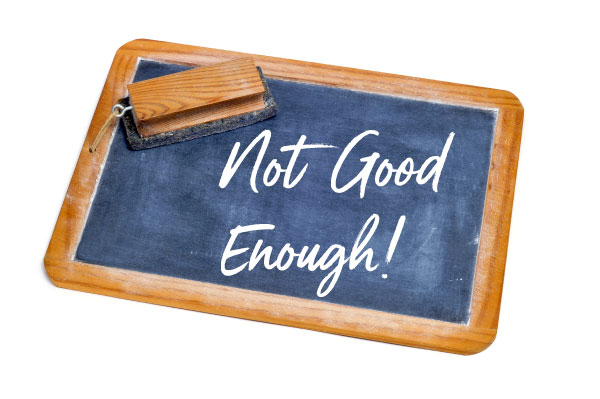 I’d feel like a “failure” and this would be further “proof” that I “was rubbish”, that I didn’t “have staying power”, and of course “wasn’t good enough”.

Having support and accountability is incredibly powerful.

However when it comes to our commitments it can sometimes have the opposite effect if we have a deeply entrenched “not good enough” story running the show.

Here’s how this phenomenon works:

We decide to make a change in our life – whether it’s in:

It may be something we commit to doing ourselves or we might sign up to a programme or a supportive group – maybe a free group, or something as simple as an accountability buddy – or we might invest in a programme – perhaps even a high level mastermind group.

At the beginning we’re very enthusiastic – we’re committed, we jump in wholeheartedly – we’re going to “do this!”

But then we hit a wall – things might get challenging – maybe something external comes up, that we couldn’t possibly have foreseen.

And the doubts creep in – do we have what it takes, can we really do this, maybe we just don’t want it badly enough….

At this point it can go one of three ways:

Now I dare say there a whole heap of different possible scenarios but these are the key ones I have experienced and have witnessed within groups I have been a part of.

And what often happens is that when we have a “not good enough story” – we’re likely to experience one of the latter 2.

We may “blame” ourselves for not doing what it takes – or making a bad decision in signing up in the first place.

Or, in the case of a paid for programme, we might actually “blame” the leader for not delivering on their promises (blaming others is often a defence mechanism to mask our own pain of not feeling good enough).

So one of the things I always do – both in my own life and working with clients is to dig deeper.

I explore what is actually going on underneath the specific circumstances.

For myself, I started to look back and see all the times in group situations where I would publicly commit to something and then fail to follow through.

And even though there was no follow-up, so I never had to publicly admit to not doing something, I knew I hadn’t honoured my word and I felt bad.

It happened enough that I noticed a pattern:

I’d commit, I wouldn’t follow through, and then I’d feel that I was letting myself down.

Instead of my commitments moving me forward and supporting me in reaching my goals – I confirmed to myself over and over how “rubbish” I actually was.

I noticed how often this pattern played out – and just how much it supported my “not good enough” story, instead of giving me the transformation I craved.

And once I could see it it started losing its hold over me.

To support me on this journey, I decided to stop committing publicly.

Instead I experimented with committing just to myself – but only to those things I knew:

And this started breaking the “not good enough” cycle.

Over time the feeling that I was letting myself down became less and less.

Until now my “not good enough” story rarely plays out.

Breaking free of “not good enough” is a huge part of the work I do with clients and whilst it doesn’t happen overnight it’s the most freeing journey ever – to my bias!

And if you’d like some help with this – do let me know.