Setting goals and intentions isn’t necessarily a recipe for success

It’s generally considered that goal setting or setting intentions is a good thing.

If you search on Google Images for “Goal Setting Quotes” you’ll find loads.  For example: 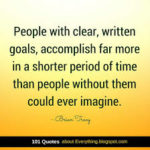 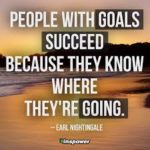 For many people setting goals and intentions is vital.

It fuels them, inspires them and helps them achieve great things.

But what if we’re wired differently?

What if, instead of inspiring us, goals (and intentions) are more like a noose around our neck – something we set because we’re supposed to?

And then if we don’t achieve them we use it against ourselves as yet more proof that we’re “not good enough”?

For the past 2 years I’ve not set any goals or intentions.

I’ve felt like an alien in a foreign land!

But I’ve also been happier, more joyful and more fulfilled than I’ve ever been.

It’s widely accepted that goal setting, having a big vision and a “you can do it!” mind-set are recipes for success.

Yet goal setting, having a big vision and a “you can do it!” mind-set are often what stops many of us from achieving the true lasting joy and fulfilment that we actually crave.

What we actually crave are feelings.

We believe that the goal or vision will give us these feelings.

Please note I’m not saying “don’t set goals or intentions” – as a tool, goals can be incredibly supportive and helpful.

However when goal setting is used as a recipe for a prosperous, happy and fulfilled life – like it’s the holy grail – it can open the door to frustration, feelings of inadequacy and feelings of “what’s the point” – especially if we have a “not enough” story.

Because often, with many of our goals or intentions, our experience goes something like this:

Scenario 1:  We set a goal, we draw up a plan – we follow it diligently.

We don’t get the results we hoped for which leaves us feeling frustrated and fed-up.  We review everything – find out why it didn’t work, course correct and continue – this often improves things but we generally end up feeling frustrated that despite all our hard work we’re still not where we want to be.

Whichever way it works out we feel bad and deep down we become a little more resigned and fed up – but we keep pushing through because we’re committed to our dreams.

Problem is, it never lets up – it just keeps happening over and over – like a stuck record.

Of course we have little bits of respite – some successes – just enough to keep us coming back for more – and reaffirming to ourselves that “this time it will be better”.

When I look back at my own life I can see one of these patterns playing out every time I set a goal (I tended to fall into scenario 2).

And the areas where I had great success was when I didn’t set a goal – I simply decided to do something because it looked like fun.  And because I was excited , I put my heart and soul into it because the activity itself was motivation enough.

My attitude was always “I don’t know how this will work out or whether I can do it but I’m going to have fun trying”.

For some of us (myself included) the reason we don’t achieve our goals – is not because we don’t have enough skills, or we’re not quite there yet – it’s because we’re not meant to.

Instead what it’s pointing to is that there’s a different path for us to tread.

And if you relate to what I’m sharing and would like to explore whether you’d like to tread this path less travelled then do get in touch and we can talk.