Slamming on the brakes – and how I broke free 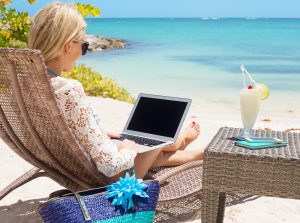 Many years ago, I used to give myself a hard time for not following through on implementing systems which could be run on autopilot.  It was the era of creating passive income and the “lap-top lifestyle” was the in thing:  make money while you sleep, or whilst sitting on the beach sipping a pina colada; work a few hours a week and earn 6-figures.

I had the skills to implement a passive income revenue stream.  I had digital products I could sell.  I had all the software I needed and was being mentored by experts who were already successful in this area.

All I had to do was implement.

Yet time after time I would launch an online programme – and stop.

The launch generally went ok – enough of a success to make the whole project viable.  Yet for one reason or another I never built on that success.  Instead I would let it peter out and a few months later I’d launch something else.

The pattern repeated for years and all the while I would beat myself up as being useless because I didn’t seem to be able to get my act together.

What I never explored at the time was why.

Why was I constantly on the launch treadmill?

What was driving that behaviour?

In the Sacred Selling System (my flagship programme) we explore what we truly want – not the dream, or what our ego thinks we want – but actually what our heart longs for.

We also dig deep into the patterns that sabotage us from having what we truly want.

Reflecting on my launch – stop era, I discovered three things playing out:

1.  My personality doesn’t suit a “rinse and repeat” business

At my core I’m an explorer – I love nothing more than trying something new and seeing what happens:

Running a business on auto-pilot had no interest for me at all.  Following someone else’s formula had no thrill for me.  I wanted to try something new and see if it would work.  Launching was always exciting because it was new – and it was always exciting to discover if people would buy or not.

In truth I was beating myself up for not doing something I didn’t want to do.

It’s easy to look back and see how crazy that was – but at the time I didn’t have the self-awareness I do now.  I really thought passive income was the answer to my prayers – it would give me the time and money to do what I loved to do.

I didn’t know back then, that business meant so much more to me than making money – or even making a difference in the world.  Being in business fuelled my curiosity and was an outlet for my creativity.

2.  I had a deeply entrenched “not good enough” story

A voice in my head would appear and say “you’re rubbish you”.

Every time I didn’t follow through on a “rinse and repeat” system I would beat myself up – thus magnifying that story.

When I launched the Sacred Selling System in April – I had years and years of baggage of seeing myself as someone who “didn’t follow through”.   And so at the back of my mind I was concerned the same thing might happen?  What if I launched this and gave up?  This felt different – but so have other things I’ve launched.  I blogged about it and discovered a crucial difference.

You can read my insights here:  Launch Insights – A Game Changer

3.  I believed there was a “missing piece”

I used to believe that experiencing success was the end goal – that once I’d reached 6 figures all would be well in my world.  For years I searched for the missing piece – that one golden nugget that would transform everything.

But instead what I discovered was that the missing piece doesn’t exist.  Indeed, letting go of sabotaging patterns and discovering our life purpose is not something we do once – it’s a journey.  And it’s one that’s integral to our business evolution.

The me who launched the Sacred Selling System last month is not the me who launched programmes 6 or 7 years ago.  I no longer carry the same baggage.  So many of the patterns that used to play out have dropped away – including “not good enough”.  Remnants remain but it no longer stops me in my tracks like it used to.

I can also see that the Sacred Selling System is so much more than a sales system.  It’s a voyage of discovery and along the way sabotaging patterns lose their grip.

I could beat myself up that it took me so long to get to this point.  Or I could look back and appreciate every moment of that adventure.

I’m pretty sure you can guess which option I’m choosing.

If you’d like to learn more about the Sacred Selling System you can do so here: