The Gift of Compassion 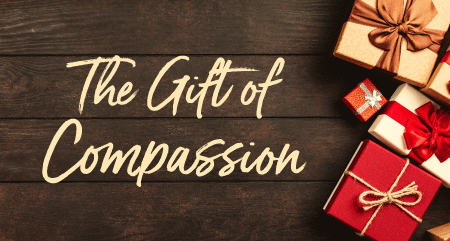 So as I was preparing to write this post, the first thing I did was look up the meaning of compassion.  This is what the online dictionary states:

sympathetic pity and concern for the sufferings or misfortunes of others

I have to say I don’t like that definition.

It doesn’t quite fit with what I want to share.

I believe that one of the greatest gifts we can bestow on ourselves is the gift of compassion.

That compassion has the power to heal.

But when I read the dictionary definition it feels very passive – and for me compassion is anything but passive.

You see, I meet a lot of people who believe they should be able to accomplish anything and everything they set out to do.

They set themselves incredibly high standards, take on loads in life and believe they should be able to achieve it all.

If they “fail” in any way they are incredibly hard on themselves, they get angry with themselves and feel stupid.

If they’re not where they want to be in life they beat themselves up – demanding that they pull their socks up and take massive action.

I see this tendency I people all the time – because it used to be me.

In fact I’ll never forget the time when I was talking to my mentor and telling her how I’d messed up – that I didn’t have a business at all – instead I had a lousy job; because if I didn’t get on the phone and generate sales I wouldn’t make any money.  I was so low believing I had wasted the past 10 years of my life.

Her words in response were:

“I think you’re being very hard on yourself”.

As I think back to that moment I choke up.

I was hugely hard on myself.

I wasn’t where I wanted to be – which meant I’d messed up – BIG TIME.

I really was useless after all!

What made it all the more heart-breaking was that I’d done loads of transformational , spiritual and personal development work by this time “I shouldn’t be here, I should have nailed this by now”.

I had no compassion for myself – none at all.

In that incredibly low moment of my life I couldn’t see any of the leaps I’d made, how far I’d travelled – I simply felt I’d messed up hugely.

But those words from my mentor stopped me in my tracks.

Because they were true.

During that time I was going through a huge transition – and everything had to break down before I could experience the breakthrough I craved.

Beating myself up was neither going to change that process nor speed it up.  In fact berating myself was the very thing which had been perpetuating my “not good enough” story for years.   It was playing a huge role in keeping me stuck – not freeing me!

From that moment onwards I started paying attention to all the areas where I was incredibly hard on myself.

I would ask myself if I would speak to a child in the way I spoke to myself.  Of course not!

I poured love and compassion on myself – especially when I believed I’d “messed up”.

I saw my courage in stepping out, trying new things recognising that messing up and making mistakes was part of the process.

I thought about my children when they were little baking cakes.  The kitchen was trashed after they’d finished – flour everywhere –but that’s part of the process – and a lot of the fun.  It’s easy to clean up afterwards.

We learn through experimentation – sometimes what we try works really well other times it flops.  It’s how we truly learn and grow.

But when we have such high expectations of ourselves (which so many of us do) we are unable to experience the joy and fulfilment we crave – because NOTHING can ever meet our expectations.

For example we launch a programme and get 35 people sign up – but instead of celebrating the success we feel disappointed that we didn’t get 50 which was our goal.  Or if we get 50 easily we wish we’d set our goal at 100!  Sound familiar?

I remember launching a programme that was hugely successful – I had over 100 people sign up.  On the one hand I was delighted I’d hit my goal – on the other I felt completely overwhelmed because everyone who signed up got a 1-2-1 call with me – and that meant a LOT of calls!  I’d also changed strategy mid-way through and wished I hadn’t so I berated myself for that mistake.  Yet I’d had a wildly successful launch that came from a brilliant idea that everyone loved.

But I couldn’t feel the joy because I was so focused on my mistakes rather than my achievements.

And that was a pattern.

To shift it – I had to go the opposite way – start to see EVERYTHING I had accomplished – even something as simple as making great mashed potato.

When I pour compassion on myself for “messing up” I learn in a way that I never learned when all I did was yell at myself.  I now know that I need to start preparations earlier so I don’t have as much to do at the last minute (of course I’ve always known that – the difference now is that I’m actually making headway and becoming so much more organised and prepared).

Compassion has the power to transform so much – so what do you need to pour compassion on?  Are you being hard on yourself in a way that you would never be to a child?  What can you do to shift this?