The Gift of Consistency 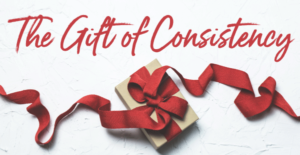 Many people have told me they are inspired by my blogging challenge – they are cheering me on and are impressed at my dedication.

I’m impressed myself because had I undertaken this challenge at the beginning of 2018 there was no way I would have blogged consistently every day.

Sure I would have produced a lot more blogs than I might normally in a month – but every day for 30 days – not a chance!

However in the past 18 months I have been exploring consistency.  It was never really a goal of mine to be consistent – it happened more by default (like a lot of things in my life).

But as I look back there was a very clear process that I went through – and it’s played a key role in supporting me let go of my “not good enough” pattern.

And if you have a “not good enough” pattern, I think you’ll find my process helpful.

First, you have to be aware of how our “not good enough” pattern plays out on a daily basis.

For me “not good enough” would often appear as a voice in my head which said:

But as I started to pay attention to it, I noticed how I would set myself up to fail – especially when it related to commitment and consistency.

I committed to too much.

I was so desperate to change so many things quickly that I would commit to this, that and the other.

I would want to do it, I believed “I should be able to do it”, “other people were doing it” (which meant I could to) – so I’d commit.

And then the voices would appear:

But over the years I got wise to my patterns – and I stopped committing to so much.

This sounds easy – but in fact it was much harder to actually put into practice!

When I started committing to less, the little voice in my head would say “you can do more”, “that’s not enough”.

I had to make a very conscious effort to no pay attention that voice.

Because it’s a trap!  You see, when we undertake a new challenge, we’re excited, we’re full of energy, we’re raring to go – we think we can achieve anything!

But a little way in, our enthusiasm wanes, it gets difficult, our motivation goes out the window – and then we want to give up.  Our “not good enough” pattern then steps in and suggests it will be ok to miss a day “it won’t hurt”, “you’ve been busy”, “you deserve to take a break”.

And so we don’t succeed and the “not good enough” pattern wins the day!

However when we commit to something that’s a stretch but not so much that we’ll fail – we achieve it and our “not good enough” pattern cannot play out!

For me, I explored this process through my wellness journeys and more specifically counting steps (something that’s easy to do and easy to track).

I’d tried committing to 10,000 steps several times in the past and failed.

So 4 months ago I tried a different approach.

I committed to 6,000 steps.  This was much more difficult than it sounds.  Initially it felt like I was wimping out – that it wasn’t enough – I should be doing 10,000 like everyone else.

See how “not enough” crept in immediately trying to sabotage me!

I ignored the voices and committed to 6,000 daily steps.

After 2 weeks of success I upped it to 6,500 (still an easily achievable target).

And I remembered a story one of my mentors shared with me about training dolphins.

When they train dolphins, the aim is to get the dolphin to swim over a bar.  When they do they get a treat.  At the beginning, the bar is on the bottom of the pool so it’s easy for them to swim over.  Once they learn to swim over it consistently, they raise the bar.  They then keep raising it – until the dolphin is able to jump right out of the water and through a hoop.

However if at any point the dolphin STOPS swimming over the bar consistently – they lower it again.  They raise it once the dolphin once more swims over it.  They don’t punish the dolphin for failing, they don’t shout at it, tell it it’s useless.  They simply lower the bar.

And in time the dolphin is performing all these amazing tricks.

I did the exact same thing with my steps.

When I wanted to raise the bar counting steps, I didn’t raise my daily step count again – instead I set a monthly goal of 300,000 steps – which meant averaging 10,000 steps a day.

But because I didn’t HAVE to do this every day it was much easier to achieve.  I could make up steps on some days by going for a longer walk, going shopping, or simply cleaning the house!  It meant I was achieving the same number of steps in a month – but this way gave me much more flexibility.

And it’s given me an experience of consistency – one which I’m extremely proud of – a stark contrast to my “not good enough” story.

So when I took on the blogging challenge I’d already had experience of being consistent – and so I simply applied the same principals.

When I was short of time, I repurposed some content I’d written previously – my commitment was to blog daily – it didn’t mean I had to create new content each and every day.   In the past I’d have probably insisted I created brand new content every day – and set myself up to fail!

So in summary if you have a “not good enough” pattern – mastering consistency will help you eliminate it.  To do this pick something that’s a stretch but something you feel confident you can achieve.  And only try to master one thing at a time!

And it can be in any area of your life because it will ripple out everywhere!