The Magic of Saying No 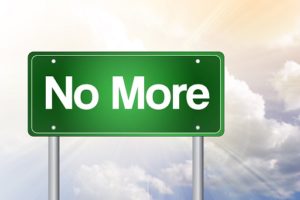 I woke up like I do most mornings with a desire to write. But the question was: do I write in my journal or write a blog post?

I had an insight this morning as I was laying in bed – a follow on from many insights I have been having this week about my writing – and that was that I feel like I have to explain and justify what I’m up to through my writing.

For example if I haven’t written for a while I have to acknowledge that and explain why.

If I feel that I’m being flaky, or inconsistent by telling you I’m going to do something and then I don’t – I have to out myself and justify it.

But when I look at the essence of who I am I LOVE to explore – I love to head off in a certain direction, get to a fork in the road and then decide which way to go.

Over the past few years I’ve been exploring all the local paths around my house – there’s a lot and I love to vary the walks by mixing and matching various parts of different walks.  Often, I’m not sure which direction I want to go so I only decide after I’ve set off.

And it’s the same with my writing – I don’t write with a fixed plan (like you’re supposed to).  I write how I walk – I meander – I start off in one direction and often end up in totally unexpected places.

If I’m journaling that’s great because no-one will ever read my journal. Ok in the interests of full transparency I have this secret desire that one day I’ll be famous, well-known and respected for beautiful writing– and when I’m dead and buried my family will find my journals and discover they are full of golden nuggets and wisdom – and so they will then be published and loved by many.

However I will be long gone so I don’t have to worry about how they’re received – I’ll be dead – who cares what people think of me when I’m dead?  If I’m dead I can’t be hurt by anything!

And there’s the heart of what’s really going on in my writing.

But whilst I’m alive and sharing my heart and soul – I can be misunderstood , judged, hurt.

So I edit to death in an attempt to minimise that pain.

I edit them to tame them into shape.  I attempt to mould them so that they fit with what’s expected of a business blog.

And they never do – because my style of writing doesn’t fit the “business blog mould”.

I’ve been in business for 15 years – and throughout my journey I’ve watched people struggle trying to shape themselves into a business that isn’t who they are at their core.  I’ve done it myself – goal orientated, totally committed, playing full out for success, yet no matter what I achieved it never seemed to quite live up to the mark of what I thought I was capable of.

Where the heck did that yardstick of capability come from anyway?  Who determined what I was capable of?

Maybe it started with me growing up believing I could be anyone and do anything.  Then discovering there were certain things I did which I had no talent for – like playing the violin, mountain walking or sewing.

I say I had no talent – but I was competent at them all – I played the violin in the county orchestra, made my own clothes – trousers, skirts and simple dresses (they didn’t take much skill), I signed up for all the school trips to Snowdonia and would always make it to the top of the mountain (usually kicking and screaming).Yet I actually do have a talent for writing (or so I’m told), and when I’m not worrying about how my words will be received it’s a joy for me to write.

Yet knowing this hasn’t eased the struggle – in fact it’s just made me more frustrated because it morphs into “I shouldn’t feel this way”.

But there comes a time when enough’s enough.  When it’s time to say “no more”.  Time to let go of what doesn’t serve us.

And after spending 2 hours writing a message to someone simply to say “no I don’t want to do your coaching programme” I’d reached that point.

In that process I realised I was trying to justify and explain myself – when no explanation or justification was needed.

A similar thing was going on with my email and blogs – I attempt to justify and explain who I am.

When you look at it dispassionately from afar it’s crazy!

But when you’re in it it’s excruciating.

And so I stopped – I sent a very simple email to the coach saying “no it’s not for me” and abandoned the emails I started writing to you yesterday.

]I decided to stop – take the rest of the summer off, not stress over having to “grow my business” whilst my children are on holiday and simply do what I get paid to do.

I have more than enough income to cover our requirements in August – and I can afford to take the summer off.

I closed my computer and did something else.

30 minutes later – I kid you not – I received a message saying we’d just received payment on a sale I’d been negotiating.  Which means I’m due a commission payment for it in August.

No!  Magic happens when we follow our hearts and say no to the things which don’t serve us.

What things do you do which constantly cause you stress and struggle?  Is it time to let go of something?  Or to say “no, no more”?

Have a wonderful weekend.